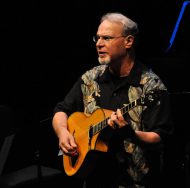 Henry Sapoznik is an award winning producer and performer of traditional and period Yiddish and American music and one of the architects of the klezmer and Yiddish renewal. In the 1970s he founded one of the first klezmer bands, “Kapelye” and was Founding Director of the Archives of Recorded Sound at the YIVO Institute for Jewish Research. In 1982 he published the first modern klezmer tune book, “The Compleat Klezmer” and issued the first anthology of historic klezmer recordings for the Folkways label.
In 1985, he founded KlezKamp the first program dedicated to revitalizing traditional Yiddish music and dance and directed it for its 30 year life. A five time Grammy nominated producer, Sapoznik is also a world renowned old time country banjoist. He is currently working on his 30th reissue box: “Protobilly: t he Minstrel and Tin Pan Alley Roots of Country Music 1892-1985” (JSP Records)
See more about Henry at Wikipedia: https://en.wikipedia.org/wiki/Henry_Sapoznik