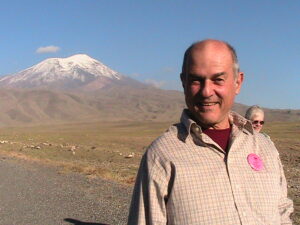 Jim Gold brings to the table a plethora of talent – as a folk dance teacher, choreographer, musician, writer, tour organizer, and leader of international travel groups.

His search for new discoveries, blended with his love of travel and easy humor, makes traveling with him a delight. Jim leads trips to such exotic countries as Bulgaria, Greece, Turkey, Israel, Norway, Poland, Armenia, Hungary, Croatia, and Slovenia.

He teaches folk dance classes in New York, New Jersey, Connecticut, and weekend dance camps. His welcoming personality and enthusiasm for life encourage folk dance students and travelers alike.   In the learning process, their bodies strengthen, their minds open, and their horizons expand.

Jim is a classical and folk guitarist.  His one-man show: “An Evening with Jim Gold” features international folk songs, classical guitar, ad-libs, and off-beat, imaginative stories. It has appeared on TV and in schools and universities throughout the USA.

His presence at special events adds a magical touch when Jim leads guests in spirited horas and joyful reels.

His varied life is chronicled in ten books which he has written.  Zany! An Entrepreneur’s Guide to the Next Universe,  gives you an idea of his unique humor and imaginative business approach.  Jim’s latest is a book of his folk dance choreographies: A Treasury of International Folk Dances: A Step-by-Step Guide.