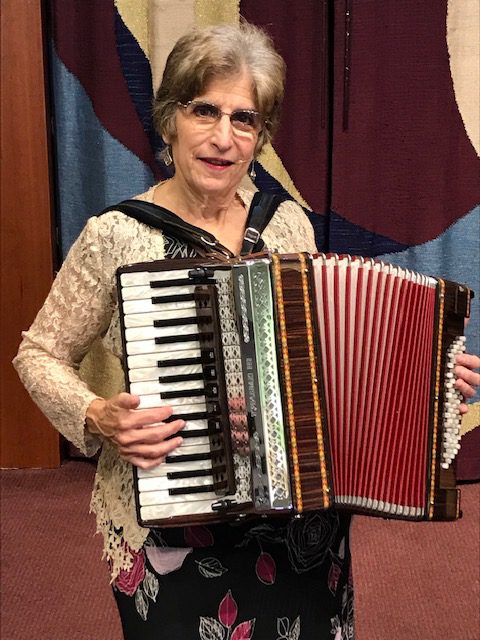 has performed internationally as a singer, pianist, accordion player, and music director. She is a founding member of The Casco Bay Tummlers, Klezmer Band, which has performed for over 30 years and toured Europe 3 times. As founder of The Maine Squeeze Accordion Ensemble, she directs, plays and sings with 4 other accordion players and a percussionist. Her solo work includes a one-woman rendition of Gilbert and Sullivan’s operetta The Mikado which she performed at the Edinburgh Fringe Festival in Scotland. Ms. Three has performed in a dozen countries, and sings in 25 languages.

She was recently the onstage accordion player for a production of the award winning play, Indecent, at GableStage in Coral Gables, Florida, with Lisa Gutkin, Grammy award winning violinist of The Klezmatics. Nancy 3. is also the director and curator of the world’s only Umbrella Cover Museum, which has been featured on NPR and BBC radios and on The Weather Channel. She holds the Guinness World Record for the most umbrella sleeves (covers). She lives on Peaks Island, Maine, and in Key West, Florida. Her middle name is really the number three.